On 4th October 2018, a partnership signing ceremony was held between IMETAL industrial groups (Group of steel and metallurgical industries) and GETEX (Textile and Leather Group) under the Ministry of Industry and Mines at IMETAL Group, headquartered in Hydra, Algiers. 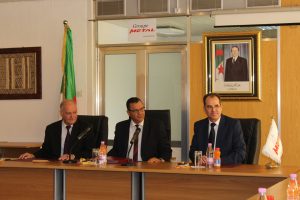 This ceremony was chaired by the General Director of the Public Market Sector Management at the Ministry of Industry and Mines, accompanied by the CEOs in the same sector, namely Mr BOUSLAMA Tarik, Mr ZERROUKI Mokhtar and Secretaries General of Industry Federations, of Metallurgical and textiles.

This convention falls within the outline of the Public Authorities orientations in promoting and protecting the national production. It sets up a commercial and legal framework regulating the transactions between the companies of both groups. 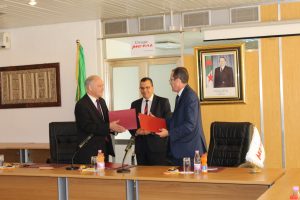 This partnership will enable IMETAL Group to acquire products that meet the quality standards with prices and deadlines studied. It will also enable GETEX Group to position itself in the national market and optimize the competitiveness of its enterprises.