The delegation members of Egyptian Trade Union of Workers in Metalworking and Electric Industries and Engineering were hosted on Tuesday 7th February 2017 by Mr. Mohamed Sakhr HARAMI, Head of Division, Portfolio Management, on behalf of Mr. Ahmed Yazid TOUATI, Chairman and Managing Director of Steel and Metalworking Industry Group IMETAL, and by Mr Saleh SOUM, representative of Algerian  Federation of Workers in Metalworking, Mechanics, Home appliances and Electronics, as part of the cooperation agreement and visits exchange.

The delegation paid a visit to Bellara plant in Jijel, where it praised its size, investments and the importance that occupies in Algeria. It also held a meeting at IMETAL Headquarters in Algiers, where the main topic dealt with is the need to strengthen the inter-trade relations in Steel Industry between the two brotherly countries, Egypt and Algeria, and the development of Trade Union forms to improve production. The delegation emphasized on the necessity of support by the Trade Unions to adapt, and it expressed its pride about the effort made by the Trade Unions and employees and the raising level of consciousness in the Steel Industry field.

The Egyptian delegation congratulated Algeria’s great technological development in Industry in general and in the Steel sector in particular, as well as the significant growth in recent years.

Lastly, and before gathering around a snack organized by the Group at the occasion of this meeting, Mr HARAMI and Mr SOUM and with the presence of IMETAL executives, they offered symbolic gifts of Algerian heritage to honour and thank the members of the Egyptian delegation for their visit hoping that it will bring a great success in Steel Industry. 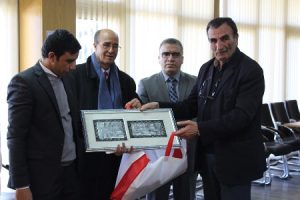 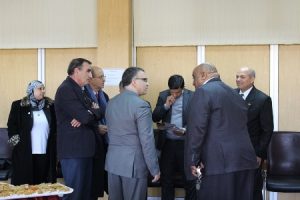